Cornstarch is a staple ingredient in cooking and baking, but it can be tricky to know what to use instead if you’ve run out of it. The important thing is to have a back-up plan.

The thing is, not everyone plans everything, and if you’re like me, sometimes you forget to double-check your ingredients.

Let’s discuss the obvious first, what is cornstarch?

Also called maize starch or cornflour, cornstarch is the starch derived from the corn grain. The starch powder is extracted from corn kernels by removing all the outer bran and germ, which leaves only the starchy endosperm behind.

Because it contains no gluten, it is safe to eat for those with a gluten allergy or sensitivity.

Most importantly, cornstarch is used as a thickener, whether in a sauce, soup, or dessert filling. To use it though, you will need to add it little by little, because it will form clumps otherwise.

What Can I Replace Cornstarch With?

If you have run out of this ingredient, don’t panic! Here are the best cornstarch substitutes:

This type of flour contains wheat, which has gluten, a protein that allows for binding and thickening. However, all-purpose flour isn’t a good thickener as cornstarch, so you should use double the amount for similar results.

While all-purpose flour is common in many baking recipes, it is also commonly used in making a roux for gravies, sauces, or soups.

To thicken sauces, mix the flour with cold water, as this can prevent clumping. All-purpose flour can be bought in any grocery store and some convenience stores.

This is the powder from ground rice, and it is used traditionally in Asian foods, including desserts, soups, and rice noodles.

Since it’s gluten-free, it is also a safe choice for those with celiac disease. It can be used as a thickener, so to replace cornstarch, double the amount needed.

Rice flour has become extremely popular, so it can be easy to find in most grocery stores, but you can also try a health store or an organic market. Also, rice flour is clear, so it can be safely used to thicken clear liquids, like broth.

Arrowroot is the starchy flour that comes from the Maranta plants. The root of the plant is dried and ground, then the remaining powder can be used in baking and for thickening. Arrowroot also contains more fiber, so many prefer it as a healthier option.

While not extremely mainstream, you can buy arrowroot in many health or organic stores. It is also clear, so you can use it with a clear liquid. To get similar results, double the amount of what the recipe calls for.

This starch is made from crushing potatoes to release the starch content and then drying it into a powder. Because it comes from potatoes, it contains no gluten, but it is a refined starch, so the calorie content is higher.

Potato starch is a good thickener and it is mostly flavorless, so you can add it in the same amount as cornstarch.

Unlike cornstarch, potato starch absorbs liquid quicker, which is why it should be added later in the cooking process. You can buy potato starch in most organic stores and specialty stores.

This type of starch also comes from a root vegetable, named cassava and it’s common in South America. Tapioca is made by grinding the cassava root down to a pulp and then filtering the starchy liquid, which can then be dried into flour.

This option is a good thickener, but you may need double the amount as cornstarch to obtain a similar thickening result.

It is also gluten-free, and a popular baking choice, so you should be able to find it in grocery stores and organic supermarkets. You can find it as flour, flakes, or pearls, but the flour is the recommended choice for thickening.

Related: Top 6 Tapioca Flour Substitutes You Can Use in Your Cooking

This vegetable gum is made from the fermentation of sugar with the use of the Xanthomonas campestris bacteria. This process results in a gel, and it is then dried, and turned into a powder.

Xanthan gum is used as a stabilizer and thickener in many processed foods, but you can use it baking and cooking as well.

Unlike the other options in this list, xanthan gum should be used little by little, because using too much can cause the food to become slimy. Finding xanthan gum may be a bit more difficult, but specialty stores and organic stores may carry it.

Can you use baking powder instead of cornstarch?

No, baking powder is used to cause rising and airing in baked goods, but it doesn’t have the thickening properties that cornstarch has. If your recipe calls for cornstarch, you should look for a substitute like the ones on this list, and don’t omit the baking powder if it is included in the list.

How do I substitute cornstarch for flour?

If your recipe calls for the use of flour, you should use about half the amount of cornstarch. Cornstarch is more starchy than flour, thus, it absorbs liquid much quicker than flour, so add it carefully and don’t add more than the stated amount, or your liquid will become too thick quickly.

Is corn flour the same as cornstarch?

The main purpose of cornstarch is to add thickening, which in most cases can be extremely important. Yet, sometimes you run out of this ingredient and it seems like everything is in vain.

If that’s the case, there is no need to worry, as these choices are great substitutes for cornstarch and will result in a very similar final product.

Chives vs Green Onions vs Scallions: What Are They and How To Use16 Total Shares 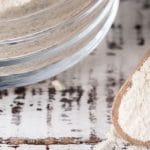